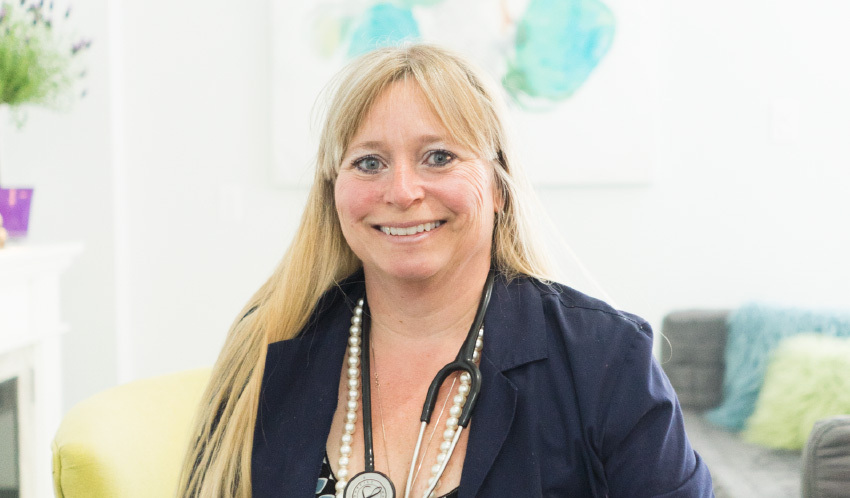 Tami is classically trained in Conventional or Western medicine having completed studies as a Registered Psychiatric Nurse in 1984 and Registered Nurse in 1989. She furthered her studies obtaining a Bachelor of Science degree in Nursing in 2008 from the University of Alberta. After graduating from the University of Alberta, her penchant for learning did not wane and she attended post-graduate studies at Walden University for 2 years enhancing her skills and knowledge in Clinical Psychology.

Over 30 years of practising, both as a Licensed Mental Health Therapist and a Registered Nurse, Tami developed a deep understanding of the Mind-Body-Spirit connection and that health is multi-factorial and treatments must also take a ‘whole-istic’ and non-linear approach.
Experiencing a paradigm shift, Tami began to pursue a path in Natural and Monastic Medicine. Having completed post-graduate studies in Bioregulatory Medicine she was awarded with a Doctorate of Natural Medicine from the Examining Board of Natural Medicine Practitioners Canada and the World Board of Natural Medicine. All EBNMP practitioners adhere to the World Health Organizations Benchmarks for Training in Traditional/Complementary and Alternative Medicine. http://www.ebnmp.com/Files/BenchmarksforTraininginNaturopathy.pdf
Tami is a strong believer in science-based holistic healthcare and has incorporated Conventional, Bioregulatory and Monastic modalities into her practice.

Bioregulatory medicine is based on systems biology and bioinformatics that regulate homeostasis by reactivating the Psychological, Neurological, Endocrine and Immunological (PNEI) systems and cellular signalling.

Being a life long learner Tami is currently continuing her studies in Natural and Monastic Medicine studying at PanAmerican University of Natural Sciences and Medicine. In January 2016 she was Invested ‘Knighted’ into the Sacred Medical Order of the Knights of Hope and Ordained and licensed as a Sanctified Healer. “Sanctified Healing Services” ( SHS) is based on indigenous Christian principles using education, the healing power of nature, hygiene, nutrition, health screenings, therapeutics, and spiritual counselling. As with Bioregulatory medicine SHS has its goal in homeostasis within the body, which may be achieved by sanctifying the proper and necessary balance between the integrated components body-mind-spirit.

Tami also has a multitude of certifications in various other treatment modalities and holds memberships and licensure ‘In Good Standing’ with the following Regulated Colleges and Organizations: College of Registered Psychiatric Nurses of Alberta, College and Association of Registered Nurses of Alberta, Canadian College of Professional Counsellors and Psychotherapists, Canadian Society of Bioregulatory Medicine, Examining Board of Natural Medicine Practitioners Canada, World Board of Natural Medicine Practitioners and the Sacred Medical Order of the Knights of Hope.

Tami is the current President of the Canadian Society of Bioregulatory Medicine and the founding Director of both Apothec Naturals and Wellness Clinic and the Academy of Bioregulatory and Integrative Medicine.

Her passion for both her patients and community is unwavering as evidenced by the many formal recognitions and awards she has received over the years. Four of the most notable:

May 2016, Malta. Attended an Investiture where she was awarded the Maltese Cross and named Chancellor and Dame of Grace of the Grand Priory of Canada. This is an International Chivalric Hospitaller Order of Saint Lazarus of Jerusalem. www.saintlazarus.org

“The Cross is the sign of humanity’s redemption; its four arms symbolise the virtues: Prudence, Temperance, Justice and Fortitude; its points represent the eight Beatitudes, which spring from the practice of those virtues;its greenness will ever remind you of the importance of Charity required of all people”

January 2016, Tampa Florida. Invested ‘Knighted’ and Ordained as a Sanctified Healer into the Sacred Medical Order of the Knights of Hope receiving the title of Deaconess, Dame of Honour, Cultural Attache.

2008 U of A, Edmonton Alberta. During graduation ceremonies at the University of Alberta Tami was presented with the Eagle Feather.

“Receiving an Eagle Feather is considered by many to be the highest honour that can be awarded within the Aboriginal culture. When one receives an Eagle Feather, that person is being acknowledged with gratitude, love and ultimate respect”

In 1985 Tami was awarded the Alberta Centennial Medal.

“The recipients of the Alberta Centennial Medal were selected by all members of the Legislative Assembly of Alberta, representatives of other levels of government, post secondary institutions, the RCMP, the military and a number of other provincial and national organizations. Recipients needed to meet the Criteria of Canadian citizenship, current or past residency in Alberta and having made a notable contribution to fellow citizens, the community and the province”